Language is not the only means of communication. By thinking and writing as if visuals don’t exist in an experience, you help the greatest number of people get your message.

UX writing never stands alone. Think and write as if visuals don’t exist, and never rely on images as the sole way to communicate a concept. Advocate for images that show more types of people and content that speaks to broader groups.

Organize thoughts chronologically, not spatially. If interfaces are organized around time instead of position (e.g., “before” and “after” instead of “above” and “below”), it alleviates a major pain point for people with visual impairments who rely on screen readers (audio or braille devices) or magnifiers (for example, an interface may be too zoomed-in for it to be apparent that person is in a modal). Doing this also avoids confusion for people with learning disabilities that make it hard to understand directional language.

Create content that can be presented in different ways without losing information or structure, sometimes called “modular content.” Perhaps the layout can be simplified, or the order of content can be switched around. 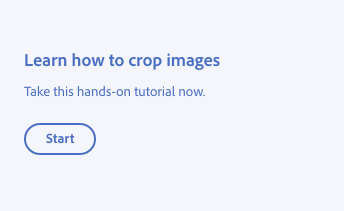 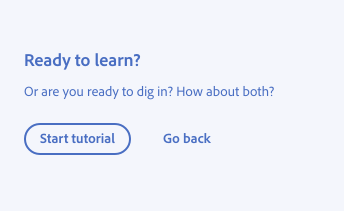 Organize interfaces around time (chronologically) instead of position (spatially) to ensure that you don’t use directional language to describe how to accomplish a task.

Prevent errors before correcting them#

Help people avoid and correct mistakes by writing in a predictable and consistent way, and make screens look and act the way people expect. Consistent navigation and identification of components across products and surfaces will aid in this. Especially in forms, label and instruct sufficiently. If an error occurs, describe the problem in text without relying on icons or colors alone. Learn more about error correction and prevention.

Every new name is a new concept that a person must learn, which increases cognitive load. But when naming is unavoidable, be consistent. Name actions across experiences and products the same, or at least predictably. Describe and define the name before mentioning it in UI content.

Provide titles to describe a situation, such as in coach marks or a stepped flow, and keep them consistent within the same situation. This helps all people navigate, find content, and determine where they are.

If visual content is time-based media, like a tutorial video, text provides descriptive identification and ideally offers an alternative to the visual, such as a transcript, closed captioning, or a step-by-step written guide.

Write about actions and their effects#

Take a step back to think about the interaction you’re writing about. Then, write about what controls and buttons do, not what they look like, in the interaction. Control type (e.g., “button” or “slider”) is coded separately, so screen readers will already pick up what it’s called. Give each a name that describes its purpose. Focus your attention on results and UI words, not how people should physically interact with a control. Each person’s accessibility tech will describe the correct interaction for them. 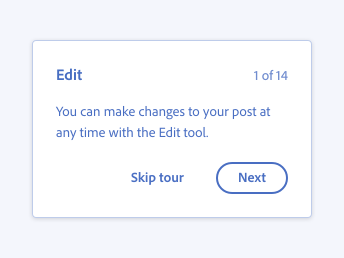 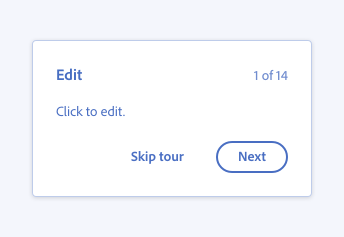 Write about the effect (“make changes with the Edit tool”) rather than the interaction (“click to edit”).

​​Don’t rely only on color or icons#

Adding words to an interface is better than relying on color or icons as the only way of conveying information, indicating an action, prompting a response, or distinguishing a visual element.

If you use links in text, make the purpose of each link clear from the link text alone. Screen readers usually inform the reader if a word is a hyperlink, so the words “click here” or “link” get in the way. Additionally, screen readers can’t differentiate between the many times “click here” can appear in one view.

Add error message text to the interface, rather than relying only on a red outline to communicate an error state.

The visual metaphors of emoji and icons can have a wide variety of interpretations, especially across cultures. Describe the interface in terms of actions and tasks, not component color or visual design.

Alt text — short strings that describe the function of interface elements and describe images — improves understanding and clarity for everybody using a product, not only people using assistive technology. For example, if you were to hover your mouse over the “search” magnifying glass icon on Adobe.com, it would reveal the alt text “Search Adobe.com.” This provides more context about the available action.

Alt text for any non-text content allows it to be changed into other forms that people need, such as large print, braille, speech, symbols, or simpler language. It makes visual cues, like icons and images, legible to people with low vision using assisted services (e.g., Voiceover on iOS, Talkback on Android).

Talk with engineers about providing alt text, hints, and traits for components. For example, an icon-only button that doesn’t have a text label needs to still communicate its purpose using text. Spectrum’s documentation has detailed guidance about building accessible interfaces, and the W3C also has a list of resources and tutorials about alt text that offer a more comprehensive introduction.

For alt text for images, view our writing guide.

Some images work in partnership with text to communicate, while other images are more decorative. Determining if an image needs alt text depends on the presence or absence of any supplementary context that text may be providing elsewhere in an experience. A good place to start when considering if an image needs alt text is to consider if the text prefacing or following the image is descriptive enough of what the image is communicating on its own. If the answer is yes, then alt text likely isn’t necessary. Alt text in addition to other text that’s already communicating the same thing can be repetitive and redundant.

If you’ve determined that an image needs alt text, start by thinking about what that image is supposed to be communicating. Then, follow these writing tips:

Here’s some examples of how to write alt text, all from the Spectrum website or components:

In general, just speak to what something is. One way to approach this is to imagine that you’re describing the image to someone over the phone. 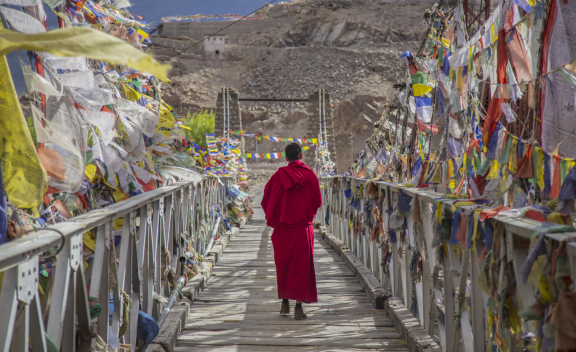 Images that show or function as UI#

Mention all parts of the UI and what the content is for each part, if applicable. Write in the order of how a screen reader would read the components in the actual UI. When an image functions as a UI component — for example, an icon-only button or an image being used as a button — use verbs to describe the action instead of the appearance of the iconography. 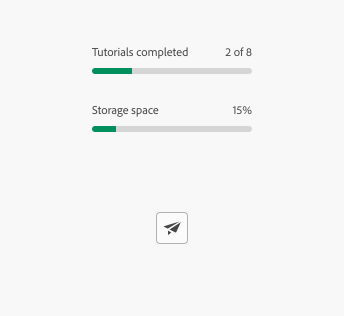 Describe any specific examples of how to apply (or not to apply) a concept or guideline that has been outlined in other text. Be sure to include any text that’s part of the image. 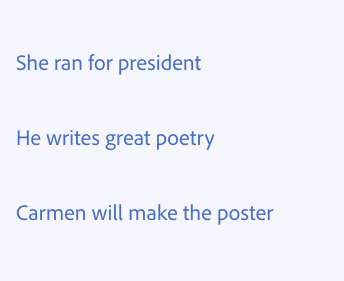 3 key examples showing correct usage of writing in simple tense. She ran for president. He writes great poetry. Carmen will make the poster.